The Bristol 10km is a great event that I wanted to be a part of, the only problem… too short! 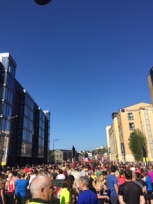 The plan was to take a 11.1km detour to the start line in Millennium square, pick up my race number and then pound the race with the other 12,000 competitors on the day.

The first 11.1km was pretty cruisey, heading up to Durham Downs from my house and then down through Clifton into the city. I arrived at just before 9am for what I thought was a 9.30am start but unfortunately having entered so late I was in the very last wave of the race start time. At 9.55am I started the Bristol 10km on a beautiful morning in the city. It was a great atmosphere with people

lining the streets along the causeway and under the iconic Clifton Bridge. Having started at the very back I spent the whole race overtaking other runners-

good ego boost but I couldn’t help but thinking that I wasn’t really enjoying the atmosphere as much as I should and was just being that annoying person that’s breathing down everyones’ necks….! Still… I kicked on and finished the 10km in 47mins30secs to see the girls just by the finish line!

But there was controversy yet, Katie set about a Facebook smear campaign arguing that taking an hour between two halves of a 1/2 marathon does not equate a full run and that it should be redone…. It will not! Week 20-tic- and onto the next one!

We have now tipped the £4000 mark – 50% of the way to repaying the cost of Autumn’s care to the NHS Trust of The Bristol Children’s Hospital… onwards and upwards.