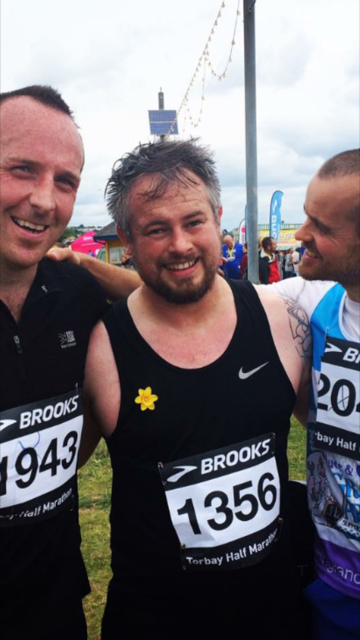 University in Cardiff some 10 years ago. We were running today in memory of Dan Young, Chris’s younger brother who’s life was tragically taken back in January 2016. I also met Luke for the first

time today as well. Luke and I connected over our shared gratitude for the Bristol Children’s Hospital. I’m so sorry to say that Luke’s story doesn’t have the happy ending that ours did and his little boy tragically passed away in April 2015. Luke is running to build to the London Marathon in 2017 raising money for the Children’s Hospice South West (justgiving.com/LComptonCHSW).

incredible. The Torbay Half is a double loop along the seafront between Paignton and Torquay. We ambled to the start line as the 10 second count down echoed under the pier and away we went. For the next 2hrs45mins Chris didn’t stop running. With a couple of pinchy hills down the middle of the course, Chris was obviously suffering as we made the first turn at 5km but we just kept moving forwards, counting to 100 over and over again. At 15km when we came to the last turn Jazz made a dash for critical energy gel substitute (Cadbury’s 99 Flakes) and we kept grinding on. At 18km we had stories of Dan and at 20km we had a few bursts for the line!

I’ve got such admiration for what Chris achieved today. Having just flirted with the glimpse of a struggle that Chris and Luke continue to endure, these runs have required 2 hour doses of unrelenting focus to accompany the suffering. I believe the challenge has helped me re-build from a tough end to 2015 and I hope it can do the same for these guys. The determination from Chris to never stop and just keep moving forwards was something that I am going to carry with me for many weeks to come.

I’m so grateful for everything that the Bristol Children’s
Hospital did for our family. Tonight, more than any other night I’m so tremendously thankful for the opportunity to put Autumn to bed and kiss her goodnight. Life’s a lottery and I feel so humbled that we  got another chance with our little girl.

To Chris and Luke, you’re both an inspiration- keep moving forwards. My thoughts are with you both XOX