Tonight I was joined by a colleague and friend from the University of Bath Sam Holmes. Sam’s has spent the last 15 years as a fitness professional and has bags of experience of distance running including the Berlin Marathon 5 years ago. Sam’s training is building towards the Bristol 1/2 Marathon in 4 weeks time and his furthest run this year had been 11 miles up until tonight. Bristol born and bred, Sam planned out a 13mile route and I simply followed on behind!

Our start and end-point tonight was Downend. This suburb of Bristol is the 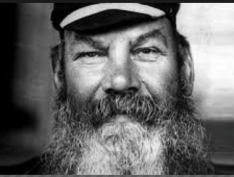 site of Downend Cricket Club, the home of legendary cricketer W G Grace considered one of the greatest batsmen of all time. Despite his position as a Victorian gentleman Grace was, by all accounts, a boisterous and extremely competitive player. Seven years after his death in 1915, Downend Cricket Club honoured the great man with the W G Grace Pavillion and that still stands to this day.

We ran via many little seen districts of Bristol including Fishponds, Hanham, Kingswood and Mangotsfield. This is not a part of Bristol that I’ve run around before but like so many times before I started to join the dots of other places that I’ve run through in the past. Sam has all the qualities of a great tour guide. Good insider knowledge and history of the city and extremely chatty. Just what I needed for this run and the time absolutely flew by. Another one chipped off the running total of 52 1/2 marathons in 2016.

Whenever I chat to people about what I am doing, they always state that you must be getting so fit…. and then assume that I must be getting faster. The reality is very different and

today’s run was yet further evidence to me that I’m getting worse. Today’s run was a 13.1miles down the cycle path from Bath to Lawrence Hill, Bristol. More-or-less uninterrupted and a flat course, warm and dry conditions. I was well fed, hydrated and free of major injury. Today I gave it my absolute best shot and finished in 1hr44mins29secs, 4 minutes off my current PB at the Bath 1/2 Marathon of 1hr40mins39secs. I spent 104mins trying to trick my mind into just keep going on the edge of what I could maintain yet it was 4 whole minutes off what I could do in March. I’ve run 22 1/2 marathons since then-pretty depressing… Not really…

… I’ve got a confession: I don’t run much between 1/2 marathons. My appetite for run training up until recently on top of the runs has been minimal. My challenge this year is about a lot of things for me and very few are to do with the times that I run. Paramount is a challenge so meaningful to people that they will donate their hard-earned cash to helping me fundraise £8000 for The Bristol Children’s Hospital. I also want to connect or reconnect with people for whom a half marathon will be a significant event in their lives. That could be in memory of a loved one or just overcoming a challenge that they never thought possible. For myself, I chose this format of challenge to focus my scattered mind beyond a single event. Each run provides me with a truly raw 2 hour experience with the singular focus of just getting to the end. I think this is unique in my life today and I cherish it in a weird love-hate kind of a way! Lastly, physical training is something that has been a big part of my life for a long time now. Last year that love had started to wane and I found myself where so many others do, just going through the motions and not achieving what I wanted from my training. 2 hours of focussed effort releases me from the guilt I used to feel of not going to the gym every morning. Now slowly, my desire for training is coming back.

Do I want the times to get better…. of course but there are many things that are so much more important to me than the times. I’ll keep plugging away and see where this journey is going to take me in the next 19 weeks.

Back to the grindstone this week, still with sand on my shoes from the Normandy D-Day

Beaches of last week. This weekend Bristol hosts The annual Balloon Fiesta at Ashton Court. A spectacular 4 day event with mass ascent of

150 balloons of all shapes and sizes across the city plus a spectacular Night Glow of Balloons when the sun goes down. It was a beautiful evening as I left the house, aiming to arrive at Ashton Court for just after 6pm, the time of the first mass ascent. The crowds and traffic were descending upon the park and I entered Ashton Court from Bedminster around 11km into the run. Sadly the only thing missing were the balloons. Despite a beautiful summers evening, the wind was just a touch too high and all balloons were grounded. I must have looked like a tourist, snapping a few photos on the run and then rushing on up the hill towards Clifton.

Unbeknown to me, Clifton Bridge had been closed to traffic and pedestrians. I got a few strange looks as I ran past some men in yellow jackets and down the middle of the road. They didn’t stop me. It was only at the other end that another security man opened the metal fencing to let me out. Having the bridge to myself was a massive treat I had good energy running through Clifton to Durdham Downs and pushed on, upping the pace as  I got deeper into the run.From The Downs I steadily descended over the final 5km skipping in and out of Bristol Rovers fans swarming towards the Memorial Ground finishing up the steep climb to home. Back home just in time for Autumn’s bedtime.

This run gave me a lot of confidence, I fed and hydrated well and felt full of energy. Not sure what the next few weeks holds for me amongst weddings and stag-do’s but I’m feeling strong going into the Autumn.

On 6th June 1944 the allied forces launched 156,000 men onto the beaches of Nazi occupied Northern France. Operation Overlord remains the largest seaborne invasion in history. Allied casualties were estimated at 10,000 with 4,414 confirmed dead and
1,000 German casualties. Following naval bombardment the British forces began their assault on Gold Beach at 7.25am. Michael Brennan was part of the 1st Battalion of the Dorset regiment and was 18 years old when he arrived on Gold Beach. Michael, who retired from his job as a newsagent in Stokes Bishop, Bristol recalled his experience to the Bristol Post in 2009 as part of the 65th Anniversary of D-Day.

“We were about to be decimated but thankfully we didn’t realise it.”

As the door dropped on his landing craft he lost, on average, 2 men per minute from his regiment as the unit came under fire from a 75mm machine gun on Gold Beach.

“It was a dreadful scene, death and body parts everywhere”.

“As soon as the doors open the machine gun fire is trained upon you so you lose people straight away. We should have landed in line with the one of the gun emplacements but that fact that we landed offline is why I’m still here today”

Within a few weeks, Michael Brennan would become the last man fighting of the 500 men who originally made up the Dorset Unit. The rest either wounded or dead. It’s impossible to imagine the horrors that these men experienced.

The goal today was to cover as much of the D-Day coastline in a half marathon. I was joined today by my brother in law, Tom Nugent. A father of 2 and a keen outdoorsman. We began our run today at Gold Beach, the scene of 1,100 British, Dutch and Polish deaths on D-Day. We headed immediately up the beach head above Arromanche where a statue of the Virgin Mary quietly prays over the English Channel. Following the assault on Gold Beach the allied objective was to move West along the coastline to link the Gold and Omaha Beaches, sweeping out 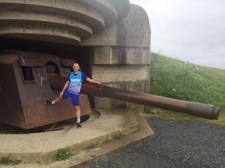 the Nazi’s along the way. Tom and I followed that route. Climbing the road out of Arromanche we tracked the coastline path for 5km until we reached the Batterie des Longue Ser-Mer. Standing in a field, some 200 yards back from the cliff edge are four 152mm Navy guns built in 1944 by the German Forces. Three of the four guns were destroyed either by air of from sea in preparation for the D-Day landings. They still remain, more or less intact as a memorial to the huge destructive capabilities of both sides. 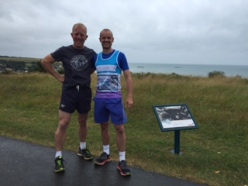 We continued along a fantastic coastline path to the harbour town of Port en Bessein which was captured by the Royal Marines as the allied forces spread West. Out of the town the road rose sharply up from the town and at this point the heavens opened. Tom had suggested we run from West to East to avoid the strong winds coming from the Atlantic and now I could see why. The beaten tracked coughed us out onto the

main road and we battled on against the wind, rain and traffic. Knowing the water was on our right we headed back off-road searching for a route down to Omaha Beach. We found a cycle track twisted our way down towards sea-level. By 12 miles we were running out of steam and begging to see Omaha Beach. At 12.9 miles, we saw the sea and paths with dry grasses and fencing that characterises the beach.

In celebration we burst onto the beach and searched around for the Omaha Beach monument- our destination. But it was nowhere to be seen, just a tiny yacht club! Looking  up onto the hillside I could see the American Memorial ground and from studying the area I knew we’d hit the far East point of Omaha Beach. We crawled on beyond 13.1 miles.

Not willing to quit and ready to meet with all of Katie’s family waiting at the end we kept moving. 2hrs30mins and 15 miles after leaving Gold Beach, we made our destination. The D-Day memorial at Omaha Beach. Omaha

was the target for American troops on D-Day and famed for the opening scenes in Saving Private Ryan. Later that day we made a visit back up the coast to the American War Memorial Cemetery where 9,387 U.S troops are buried. 43,250 men landed at Omaha Beach and faced some of the most intense resistance of anyone on D-Day. 2,000 were killed and another 1,000 wounded. This will be one of the most memorable runs of the year. Just running amongst so
much history, sadness and admiration for what people like Michael Brennan experienced on D-Day and continue to experience in combat is completely humbling. Yet another reminder that just 2hrs or so of physical discomfort pales in comparison to the sacrifices and hardships that people face every day. Thanks Tom for accompanying me, the last 6 miles were emotional!