I believe physical exertion is all about perspective. Anything can be hard but as soon as you experience something bigger you mind shifts to a new level of what is difficult. Today I

met an incredible person who has achieved something so hard that I’m not sure it can be overshadowed. In the last 401 days Ben Smith has experienced 401 marathons. Hours of running and physical exertion, pain, injury, boredom, exhaustion and overwhelm at the prospect all wrapped up into a 4 hour window per day… every…single…day…. and day after day without rest. Utterly relentless. Last week this man came into my consciousness on the BBC News and today I met an incredible human being. He’s created a cult following, inspired by his ambition and bravery to sacrifice himself for something so big that for the vast majority of us, we cannot dream it up, let alone commit to doing it. Today was Ben’s last marathon of his 401 day challenge. I headed to Millennium Square in Bristol to show my support for him and his cause and be a part of something special. I didn’t expect to come away with something so much more.

Anticipating a small group of runners ready to head out I was surprised to find over 400 people from all over the UK and beyond geared up on a beautiful Wednesday morning.

With just my phone and a bank card, I was prepared for a half marathon but at the 6.5mile turnaround I experienced what is known within this cult as The Ben Effect. Reportedly The Ben Effect has caused countless runners to ring in sick for work and renegade on their commitments to run further than they’ve ever run before. And so I did. Buoyed on by a friendly atmosphere I chatted to runners of all ages, experiences, abilities and backgrounds. We stretched out along the southern bank of the Avon, under Clifton Bridge, through the fields and villages towards Portishead. At my intended turnaround point a few 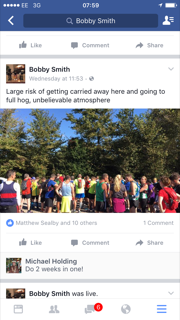 volunteer stewards muttered under their breath that this was the half marathon turnaround point and a unanimous decision was assumed for me by my group of newly found running buddies around me that I was going to run a marathon with them that day. And with that my perspective shifted, 13.1 miles was now just the half way point, the goal was now 26.2 miles today. My furthest run to date was 15 miles in Normandy back in August and that was an accident: The Ben Effect.

I chatted all the way to Portishead with people who had come to show their appreciation to Ben from all over the country. Most had run with him before over the last 14 months. All knew the journey he had been on and took pleasure in telling me his story. Ben’s target was to raise £250,000 for Kidscape and Stonewall, 2 anti-bullying charities close to his heart. So the myth goes that at one point he suffered with agonising back pains, was forced to take 10 days out of running and then catch up the mileage with ultra-marathons in the weeks and months following. Now… If you’re the guy doing the most extreme thing that you know, then what you do is tough. It’s reinforced to you by the people around you and your friends on social media. For me, a 2 hour gruelling exertion of 13.1miles each week and the consistency to do that over and over again is a mountain in my mind. But within an hour of running and understanding what this man has done my mind shifted, my perspective extended. My expectations changed and I could understand a different level of what it is to ‘show-up’ and commit yourself to something so big and so brave that you inspire thousands of people to get up and follow you. I met others who’d taken on gargantuan  challenges of their own, inspired by Ben. Equally as mind-boggling in their difficulty. I understand how it happens. What was previously impossible now becomes possible. The level above, which you never even knew existed, is now visible. It’s the same as the 4 minute mile or a summit of Everest. Previously unfathomable, now achievable. 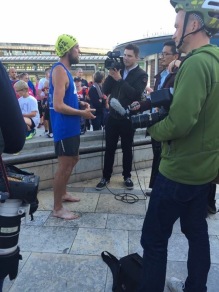 done before. To not only dream that it can be done but to sacrifice so much to see if that’s the case. Today I very briefly encountered a man with parallel ambition to Roger Bannister and Edmund Hillary and it was a privilege to support his cause and experience at the moment when a dream is realised. I came away from the finish line with a glimpse of how men like Ben think and with a fresh extension of my own perspective into what was previously impossible. On top of this I met some incredible people doing amazing things with their lives. These are gifts from Ben that he has unknowingly given to so many people and was worth the entry donation a thousand times over.