Back to the grindstone this week, still with sand on my shoes from the Normandy D-Day

Beaches of last week. This weekend Bristol hosts The annual Balloon Fiesta at Ashton Court. A spectacular 4 day event with mass ascent of

150 balloons of all shapes and sizes across the city plus a spectacular Night Glow of Balloons when the sun goes down. It was a beautiful evening as I left the house, aiming to arrive at Ashton Court for just after 6pm, the time of the first mass ascent. The crowds and traffic were descending upon the park and I entered Ashton Court from Bedminster around 11km into the run. Sadly the only thing missing were the balloons. Despite a beautiful summers evening, the wind was just a touch too high and all balloons were grounded. I must have looked like a tourist, snapping a few photos on the run and then rushing on up the hill towards Clifton.

Unbeknown to me, Clifton Bridge had been closed to traffic and pedestrians. I got a few strange looks as I ran past some men in yellow jackets and down the middle of the road. They didn’t stop me. It was only at the other end that another security man opened the metal fencing to let me out. Having the bridge to myself was a massive treat I had good energy running through Clifton to Durdham Downs and pushed on, upping the pace as  I got deeper into the run.From The Downs I steadily descended over the final 5km skipping in and out of Bristol Rovers fans swarming towards the Memorial Ground finishing up the steep climb to home. Back home just in time for Autumn’s bedtime. 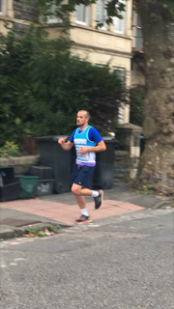 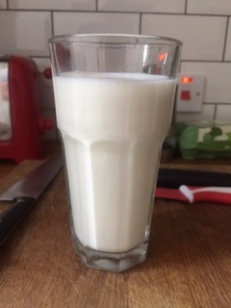 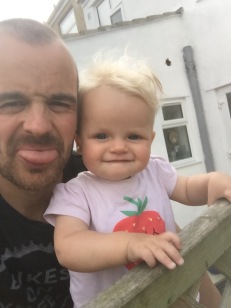 This run gave me a lot of confidence, I fed and hydrated well and felt full of energy. Not sure what the next few weeks holds for me amongst weddings and stag-do’s but I’m feeling strong going into the Autumn. 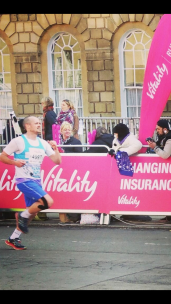 today. Such a turn around from Droitwhich 7 days ago. I can only presume it was the ridiculous amount of carbohydrate that I consumed before and during the race but I felt like I could have motored along for as long as was required today. 1hr40mins39secs is my new PB around 20.1km. My head was in it all the way but my legs just wouldn’t go faster. Is this runners high or just a sugar rush?

It’s been a fantastic day, the weather was perfect. A cool Spring morning without a cloud in the sky. Bath is an amazingly beautiful city with the start line on the grand Great Pulteney Street. Katie, Autumn and I met up with friendsDavid and Ros Ralph and after a brief interview with the BBC Points West I set up on the start line with David. Th
e crowds were huge and so supportive for 2 laps of the course. Right from the start I knew it was going to be a good day. I left my phone with Katie, ignoring times and paces and just pushed and pushed with nothing but the aim of turning the last corner to see 1hr39mins 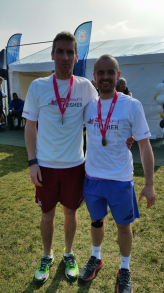 on the clock. Alas I was just 40 seconds away but really pleased with a 3min PB on a flat course. Goes to show that all the grinding up hills, bonking in Droitwich and suffering of the last 10 weeks is having a good effect on my fitness. At times over the last month I’ve felt like I was going backwards with injury and my times nearer 1hr 50min than 1hr40min but today just goes to show that no hard work goes to waste!

At week 11 were at £3,193. If you haven’t and you feel this journey merits your money then please do it this week. We need to keep the money coming to The Bristol Children’s Hospital at JustGiving.com/bobsm100. If you’ve not seen enough yet then just watch this space ;-). 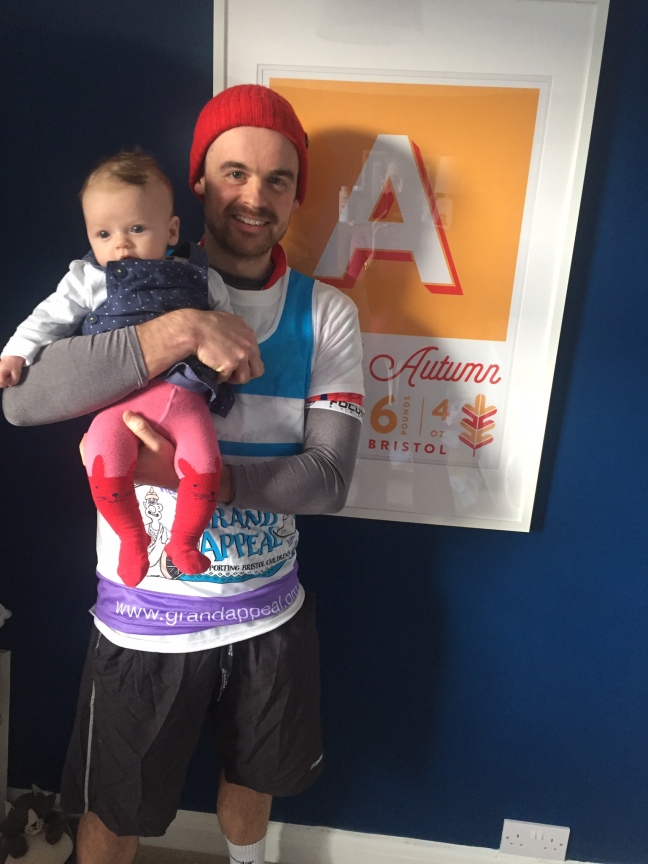 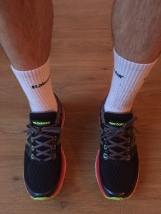 New trainers, new running vest, time to have a crack at a new PB. Decided not to have any breakfast on Renee’s recommendation from last week and it turned out to work really well. I started out on just a coffee and a good feed of carbohydrate the day before. My target setting off was 1hr40mins, 6mins50sec better than last time. I managed today’s in 1hr43mins19secs. I started out a lot quicker than last time and covered the first 10km in 48mins09secs. This would need to be 47mins24secs to be on pace 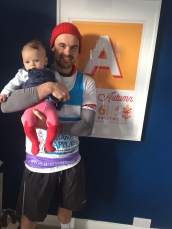 for a 1hr40mins half marathon time (45 seconds off the pace). My 15km time 1hr12mins54secs will need to be 1hr11mins06secs (1min48). By 20km (1hr37mins36secs) I was1hr34mins48secs (2mins48secs back) and then evidently by the 21.1km mark 3mins19secs off my target. Basically I need a 4min43secs average pace per km and my 4mins53secs just didn’t cut it! Got home to this littler cherub, just after a nap! So at the start of week 5 we’ve managed to topple the £2000 mark at £2039.50. Absolutely amazing, I’m so grateful to everyone who’s contributed to the journey so far. Please find my sponsorship page at justgiving.com/bobsm100. Thanks for reading.

At 8am on Tuesday 19th January, Dan Young was stabbed on his way to work in Morden, London. Dan’s older brother, Chris is a dear friend whom I went to University with from 2003-2006. Week 4’s run of Bath is dedicated to the memorial of Dan and to the family that he was cruelly snatched from.

It’s been 10 days since my last run, my plantarfascia has been problematic but has improved as the week has gone on. As such I planned to do a run that would keep the pace slower whilst still providing a challenge. Bath Spa sits in a valley basin with steep hills on either side of the river. My route took on the biggest hills in the city. I was grateful to be joined by Renee McGregor, a colleague, friend and performance sports nutritionist. Not only this, Renee is an accomplished distance runner so I was in for a good hard run. We set off straight up Widcome Hill to start, 1.4km long, 143m of elevation with average 9% gradient which ramps up steeper than that at the start and end. A pinchy beginning to the day! I felt dreadful at the start-residual of a head cold courtesy of Autumn! That was pretty much the pattern for the morning, up and down hills, along the flat. Unfortunately the flat is where Renee simply nudged the pace and I hung on with my HR teetering above 90% of maximum. She made for an unforgiving pacemaker! 90minutes and 300m of climbing later we found ourselves back at the bottom of Widcome for the last climb up to the University. At the end of it we totaled 21.5km 558m of vertical gain across 4 climbs. A good run out! 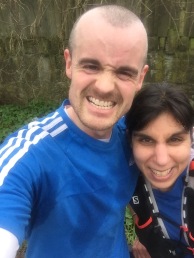 At week 4 we’re totaling £1772, thanks to everyone for their support this week. You can now follow my progress on twitter @bobsgrandappeal. Renee’s book Training Foods is a great read for all athletes- check it out.

Tonight I was accompanied by my good friend Helen. After a long day at
work for both of 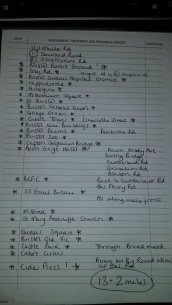 us we headed out around 6.30pm into a frosty January evening. Helen designed a tourist’s guide to Bristol visiting some of the City’s best sights. Along the way we visited The Memorial Ground (BRFC), Gloucester Road, The Peoples’ Republic of Stokes Croft, The Bristol Children’s Hospital, The Grand Appeal HQ, The Christmas Steps, Colston Hall, Arnolfini, Bansky on Park Street, Colton Tower, Bristol Zoo, Clifton Suspension Bridge, Ashton Gate (BCFC), MShed, SS Great Britain and finally… The Cider Press for a pint! We made our way around in just under 2.5hrs. My phone ran out of battery at Clifton Bridge so you’ll just have to take my word for it! Tonight’s total is £1525 for The Grand Appeal. Thanks for taking the time to read and support the cause. 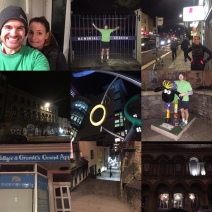 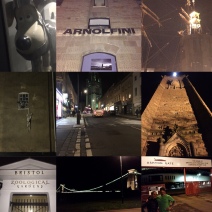 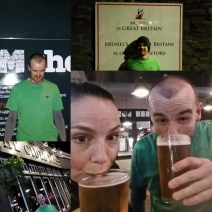 As predicted I was feeling pretty fragile leading into this one. With barely any training for the first run I knew that even with a week between runs my feet and calves might not be fully recovered from last week. In my head I thought that if I headed out on Sunday to Durdham Downs from my house and just see how that goes- if I feel terrible then leave it until mid-week to complete Run number 2. Getting through the first month without injury is absolute priority.

As it was, I felt absolutely great once I got going. The [now routine] downpour in the first 20 minutes didn’t really phase me and cracked on up to Durdham downs, through Clifton, across the bridge and down through Ashton Court. I then head back to the City via Ashton Gate, the home of Bristol City FC and along the southside of the river. I skirted through town and finished in St Paul’s/ St Werburgh’s. Really should plan circulars a bit better to finish at home as I then had a 25-minute walk in the rain to get home. Shaved 5 minutes off last week’s time which is great. 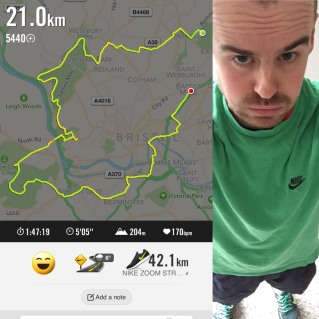 No meet ups this week on the run to report. I’ just not sure Durdham Downs and Clifton is ready for a chirpy northerner saying hello to ever runner I pass!

We’re totalling £1297 at the week 2 mark. Thanks to everyone who has donated this week, much appreciated!

Good to know I can jump up run a 1/2 marathon from pretty much scratch. Relieved it’s under 2hrs, thought the first one would be very ropey indeed!! Absolutely poured down from start to finish. May have to adjust this route when I use it again in the future as got to 21.08km’s and then had to run about another 1km into Bath for the train home!! Shorter shorts and a sandwich bag to keep my phone my phone dry are required I think.

I figure this next 12 months should be as much about the people I meet and the places I go on the journey, with that in mind I met and ran with Deejay May-Z along the path. We did a good few K’s at 5min pace. 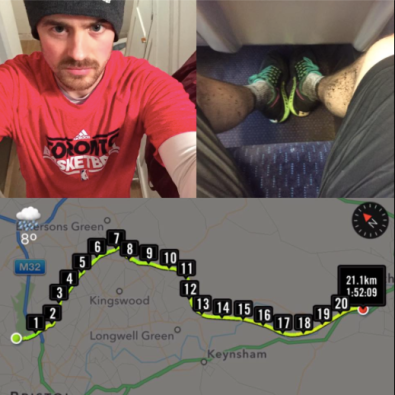 Thanks so much to everyone who’s sponsored me already, response has been massive and we’re currently at £645 already! If anyone would like to join me next week or for some training this week just get in touch.